IBM HELPED THE NAZIS WITH THE LOGISTICS OF THE HOLOCAUST 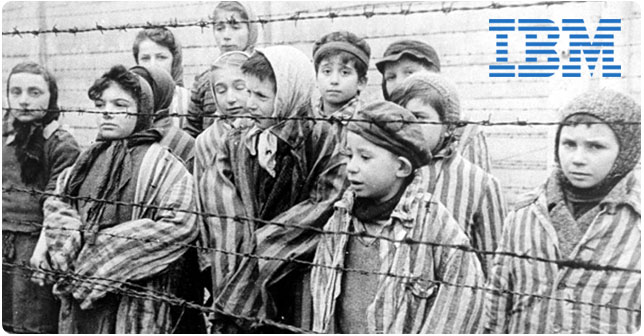 THE CONSPIRACY: Computer giant IBM works with the Nazis through its German and Polish subsidiaries to identify, relocate, imprison, and execute victims of the Holocaust.

Despite worldwide condemnation of Nazi atrocities, IBM, bastion of US corporate establishment known for its enforced dress code circumvented the Trading with the Enemy Act to facilitate Hitler’s Final Solution and profit from the Nazi war machine.

However, the task of separating Jews from the Aryan population proved difficult. The regime soon called for a national census so that it could more easily identify Jews and other undesirables within the Prussian population. Dehomag eagerly offered its services for the task and were able to identify 2 million Jews out of a population of 65 million, a much higher figure than previous assessment of around half a million. IBM used the proceeds to built its first factory in Berlin, anticipating further business with the Nazis.

Amongst other forms of identification, the punch card system proved immensely useful in identifying and displacing large segments of Europe’s population and placing them to work in forced-labor camps or sending them to their deaths. Each concentration camp was assigned a number (Dachau 003, Auschwitz 001) by IBM engineers who were tasked with programming individual punch cards. IBM designated Jews a 8, Gypsies a 12, and homosexual were given a 3.

Even individual causes of death were carefully documented; The number 4 meant the inmate had died by execution, 5 by suicide, while those who met death in the gas chambers were assigned a 6.

After the Nazi invasion of Poland, IBM created a new subsidiary called “Watson Business Machines” to help organize the mass deportation of polish Jews. It was named after Thomas Watson, the company’s chairman and CEO. Watson himself received the Order of the German Eagle from Hitler himself for his personal contributions to the Nazi regime.

IBM had a vital role to play in all 6 phases, or steps, necessary to carry on the Holocaust: “identification, expulsion from society, confiscation, ghettoization, deportation, and even extermination”.

IBM wasn’t the only American corporation co-operating with the Nazis. Ford and General Motors continued building in Germany and selling cars to Nazis. Coca Cola founded Fanta to get around sugar embargoes against Germany. and quench Nazi thirsts.

IBM and the Holocaust: The Strategic Alliance Between Nazi Germany and America’s Most Powerful Corporation
BUY FROM Amazon
2018-07-18
Previous Post: Dear Mr Curtis
Next Post: ANALIZA